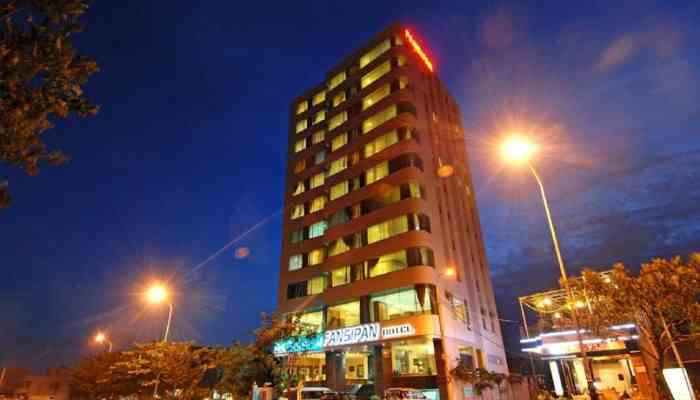 Below are the room types available in this accommodation. To see room availabilities and prices, please select a date range.

At Fansipan Hotel Danang, every effort is made to make guests feel comfortable. To do so, the hotel provides the best in services and amenities. Top features of the hotel include free Wi-Fi in all rooms, 24-hour front desk, 24-hour room service, express check-in/check-out, Wi-Fi in public areas.

Experience high quality room facilities during your stay here. Some rooms include internet access – wireless (complimentary), internet access – wireless, wake-up service, whirlpool bathtub, non-smoking rooms, provided to help guests recharge after a long day. Whether you’re a fitness enthusiast or are just looking for a way to unwind after a hard day, you will be entertained by top-class recreational facilities such as sauna, golf course (within 3 km), indoor pool, spa, massage. With an ideal location and facilities to match, Fansipan Hotel Danang hits the spot in many ways.

Built in 2012, Fansipan Hotel Danang is a distinct addition to Da Nang and a smart choice for travelers. With its location just 5. Km from the city center and 6 Km from the airport, this 3-star hotel attracts numerous travelers each year. A haven of rest and relaxation, the hotel will offer total renewal just steps away from the city’s numerous attractions such as Bac My An Beach, Tulip Brewery, My Khe Beach.

Nowhere in Vietnam is changing as fast as Danang. For decades it had a reputation as a provincial backwater, but big changes are ongoing. Stroll along the Han riverfront and you’ll find gleaming new modernist hotels, apartments and restaurants are emerging. Spectacular new bridges now span the Han river and in the north of the city the landmark new D-City is rising from the flatlands. Venture south and the entire My Khe Beach strip has been set aside for five-star hotel developments. Oh, and for good measure, a revamped international airport opened in 2012.

That said, the city itself still has few conventional sightseeing spots, except for a very decent museum. So for most travellers, a day or two off the tourist trail enjoying the city’s restaurants and nightlife is probably enough.

Danang also makes a great base for day trips. The city is part of a long thin peninsula, at the northern tip of which is Nui Son Tra (called Monkey Mountain by US soldiers). China Beach and the five Marble Mountains lie southwest of the city.

When the best time to visit Danang

The best time to visit Danang is from February to May, when the skies are sunnier and humidity levels lower. The summer months of June through August can get uncomfortably hot and sticky with temperatures of 33-34°C. It can also get crowded during these months since this is the time of year that sees a lot of domestic travel.

If you’re visiting in the months of September to December expect to see a lot of rain (500-1000mm per month), so be sure to pack an umbrella.

Danang’s renovated international airport has Silk Air flights to Singapore and Siem Riep, Lao Airlines flights to Pakse, Savannakhet and Vientiane, and there are a few connections to China including a Dragon Air flight to Hong Kong. For domestic destinations, Jetstar Pacific and VietJet have daily flights from Danang to HCMC and Hanoi, while Vietnam Airlines operates direct flights to Hanoi, HCMC, Dalat, Nha Trang, Haiphong, Buon Ma Thuot, Pleiku and Vinh.

A car to Hoi An costs around 330,000d via your hotel or a local travel agency, while xe om will do it for around 120,000d. Bargain hard if you want to stop at the Marble Mountains or My Khe Beach en route.

Danang’s intercity bus station is 3km west of the city Centre. A metered taxi to the riverside will cost around 60,000d.

Yellow public buses to Hoi An (18,000d, one hour, every 30 minutes) travel along Bach Dang. However, foreigners are routinely charged 50,000d on this route, and sometimes extra for luggage.

Danang’s train station has services to all destinations on the north–south main line.

The train ride to Hue is one of the best in the country – it’s worth taking as an excursion in itself.

Danang has plenty of motorbike taxis (Xe Om) and cyclo drivers; as usual, be prepared to bargain. Trips around town shouldn’t cost more than 25,000d.

This fine museum has the world’s largest collection of Cham artefacts, housed in buildings that marry French-colonial architecture with Cham elements.

Founded in 1915 by the École Française d’Extrême Orient, it has more than 300 pieces on display including altars, lingas, garudas, apsaras, Ganeshas and images of Shiva, Brahma and Vishnu – all dating from the 5th to 15th centuries.

The treasures come from Dong Duong (Indrapura), Khuong My, My Son, Tra Kieu and other sites.

Note that the museum’s organisation and English captions could be better, so it’s worth hiring a well-informed guide (or pick up one of the guidebooks at the museum shop).

There are also exhibits focusing on Cham culture today, with a handful of contemporary artefacts and photos of the Kate Festival (the Cham New Year).

This is the largest Cao Dai temple in Central Vietnam, serving about 50,000 followers. A sign reading van giao nhat ly (all religions have the same reason) hangs from the ceiling in front of the main altar. Behind the gilded letters is a picture of the founders of five of the world’s great religions: Mohammed, Laotse (wearing Eastern Orthodox–style robes), Jesus, a Southeast Asian–looking Buddha and Confucius (looking as Chinese as could be).

Known to locals as Con Ga Church (Rooster Church) because of the weathercock on top of the steeple, the candy-pink Danang Cathedral was built for the city’s French residents in 1923. Today it serves a Catholic community of over 4000 – it’s standing room only if you arrive late.

Despite its huge grounds, this museum is typically unenlightening for a site venerating Ho Chi Minh. At the front is a display of the usual US, Soviet and Chinese weaponry. Hidden behind the Party buildings are a replica of Ho Chi Minh’s house in Hanoi and a museum about him.

Recently rebuilt, this pagoda has three giant Buddha statues in the courtyard, and an equally imposing large gold one in the temple.

My Khe is basically a suburb of Danang, while in the far south Cua Dai is widely considered Hoian beach. The area in between has been carved up among the likes of the Raffles, Hyatt and other five-star brands, with swanky beach resort under construction and leaving only a pitiful stretch of beach open to the public.

Jutting out into the sea like a giant pair of Mickey Mouse ears, the Son Tra peninsula is crowned by the mountain that the American soldiers called Monkey. Grandly overlooking Danang to the south and the Hai Van Pass to the north, it was a prized radar and communication base during the war. Until recently it was a closed military area (and virtually untouched except for the port Cang Tien Sa), but new road and beach resorts are slowly opening.

Nam O Beach, 15km northwest of the city, was where the first US combat troops landed in South Vietnam in 1956. Today it’s reverted to a more humble form. There are a few hotels here, but the beach is not as attractive as those south of Danang.

Danang has a very lively street-food scene, and it’s hard to find a street in town that doesn’t have a resident “Bun Cha” (Barbecued pork), Rice or “Mi Quang” (noodle soup) stall. There are also some vegetarian eateries. The dining scene is flourishing, with a number of good restaurants popping up across town.

Waterfront: 150 Bach Dang Street, Riverfront lounge-cum-restaurant that gets everything right on every level. It works as a stylish bar for a chilled glass of NZ Sauvignon Blanc or an imported beer and also as a destination restaurant for a memorable meal (book the terrace deck for a stunning river vista). The menu is features imported meats, Asian seafood and also terrific ‘gourmet’ sandwiches.

Café Truc Lam Vien: 37 Le Dinh Duong Street, Dine alfresco in a pretty garden courtyard or in one of the sleek wooden pavilions. Service is efficient and the menu, including local favourites such as mi quang , is available in English. The restaurant is a short walk from the Museum of Cham Sculpture.